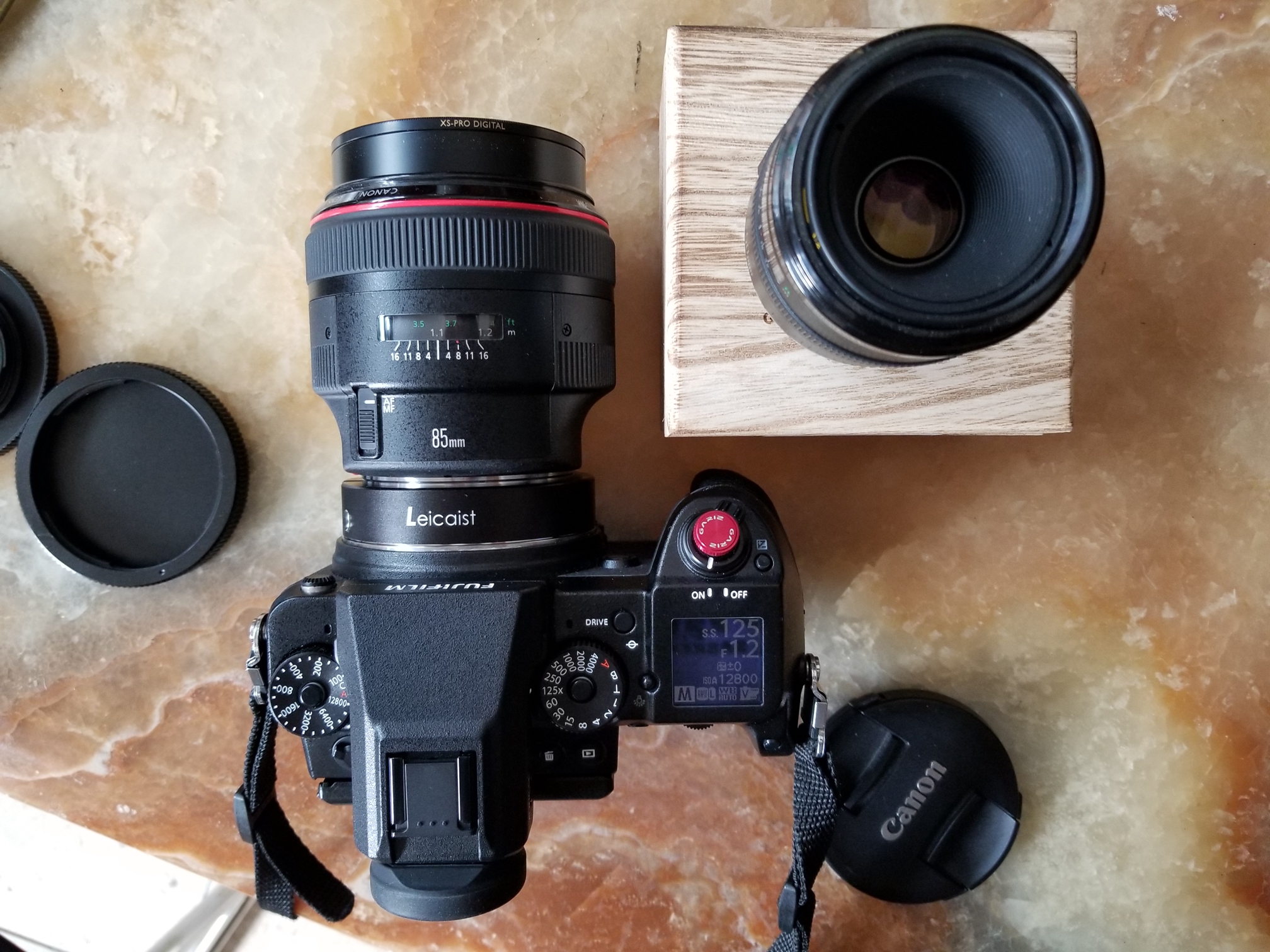 Fuji GFX-50s is a medium-format, mirrorless camera released earlier this year. Due to its extremely short flange focal distance, it suddenly becomes the best medium-format  platform for adapting different lenses.

Whether a lens can be adapted on GFX-50s is determined by 3 important factors, in addition to the flange focal distance, the image circle determines how serious the vignetting is, the way how lens is controlled (especially aperture) determines whether the lens is functionally usable.

The real challenge is, unlike Nikon- G (AI, AIs lenses and Zeiss ZF lenses has aperture ring on the lens body)  and Sony A lenses, Canon EF lenses are fully electronic lenses, meaning that there is no mechanical contact that can control the aperture. Several months ago, a Dutch company, Cambo, released a Canon EF-GFX adapter that is capable of controlling the aperture through a gear on the adapter (see figure below). This device is ugly, inconvenient (you need to charge it separately, you cannot control the aperture through the camera body), and expensive (initial price is about 1700 EUR). Makes me have absolutely no interest of purchasing one.

Thanks Leicaist for their work, today we finally have this Canon EF – Fuji GFX Autofocusing Adapter. And how well does it perform?

Although packaging is the least important factor, I would say packaging is of course, good enough. The package is a wood box with protective materials inside, which looks luxurious and provides sufficient protection for the adapter.

However, there are still some small aspects that they may improve: 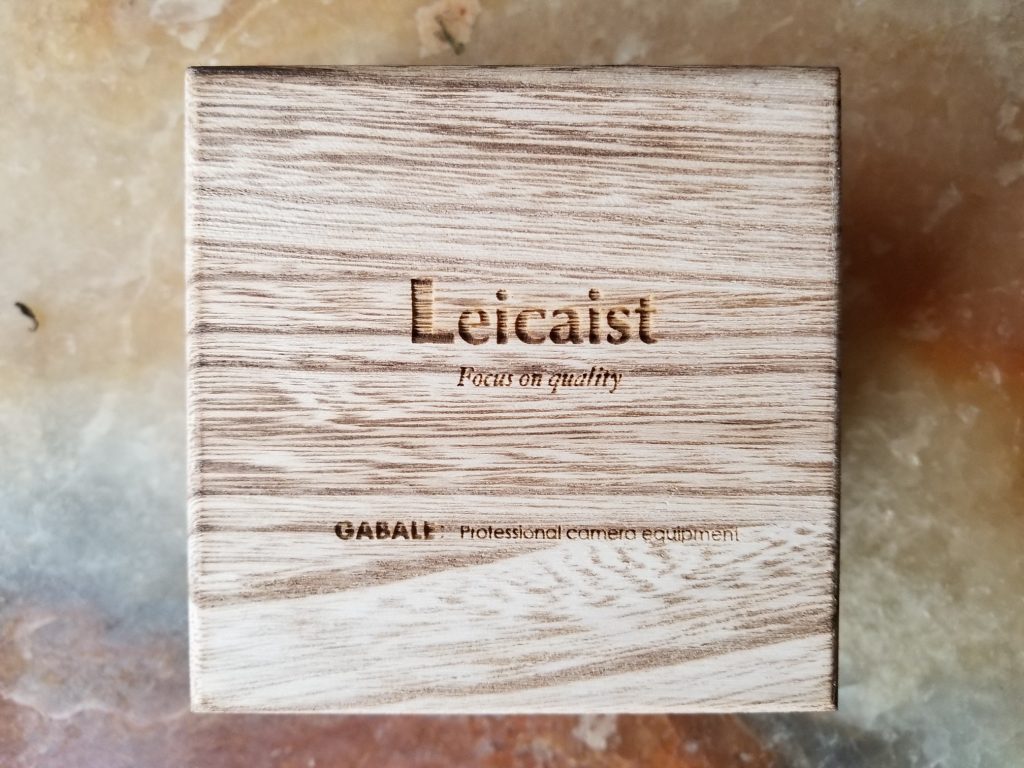 The entire adapter, including front and rear cap, were build using aluminum. All edges were carefully chamfered therefore it won’t cause any damage on personnel or equipment. The overall feeling of the adapter is “Smooth and Reliable”. An important thing that requires attention is, this adapter is a new product, we do not have sufficient data on how long (or how many times) it lasts, we are looking forward to hear more from other users. 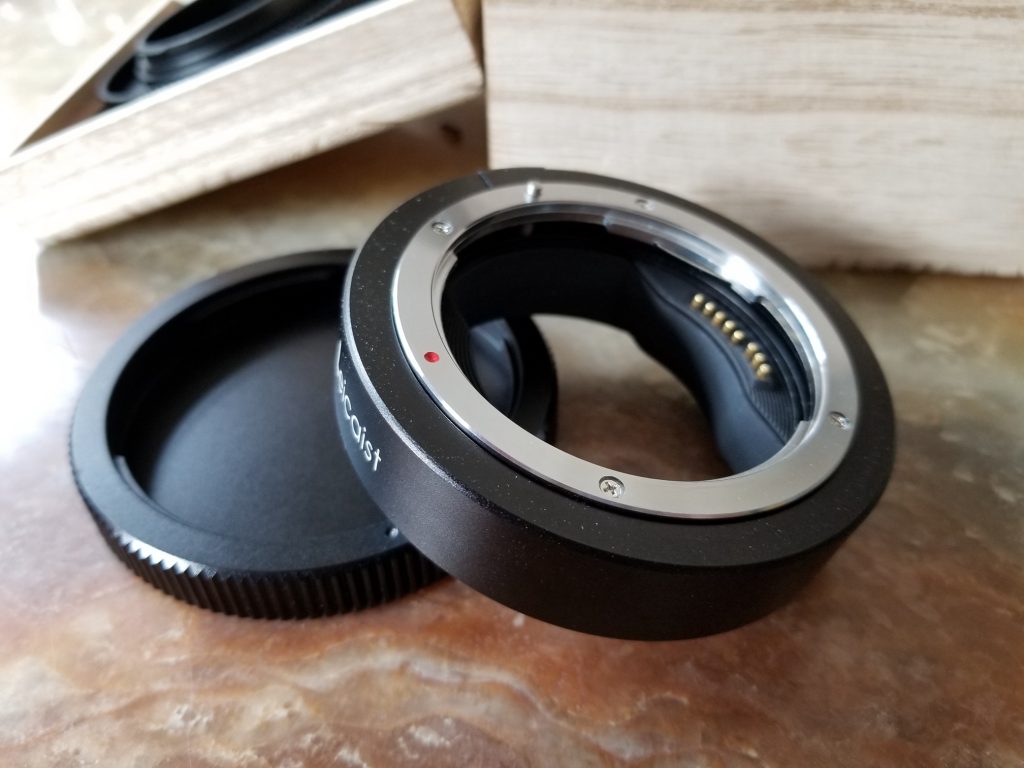 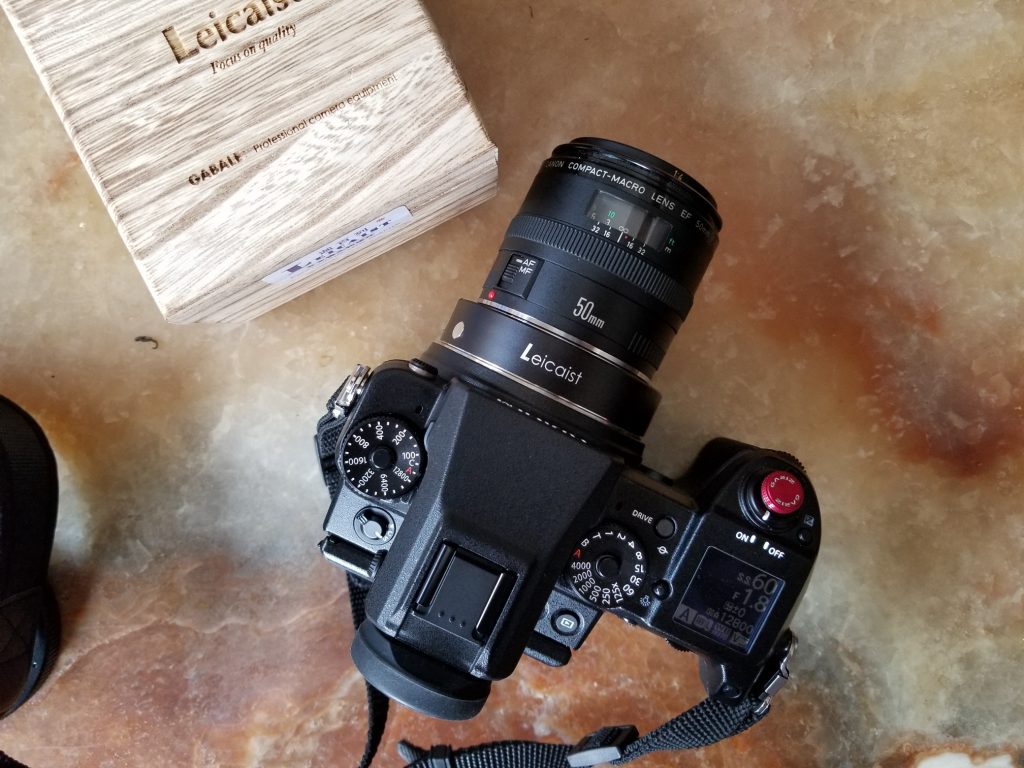 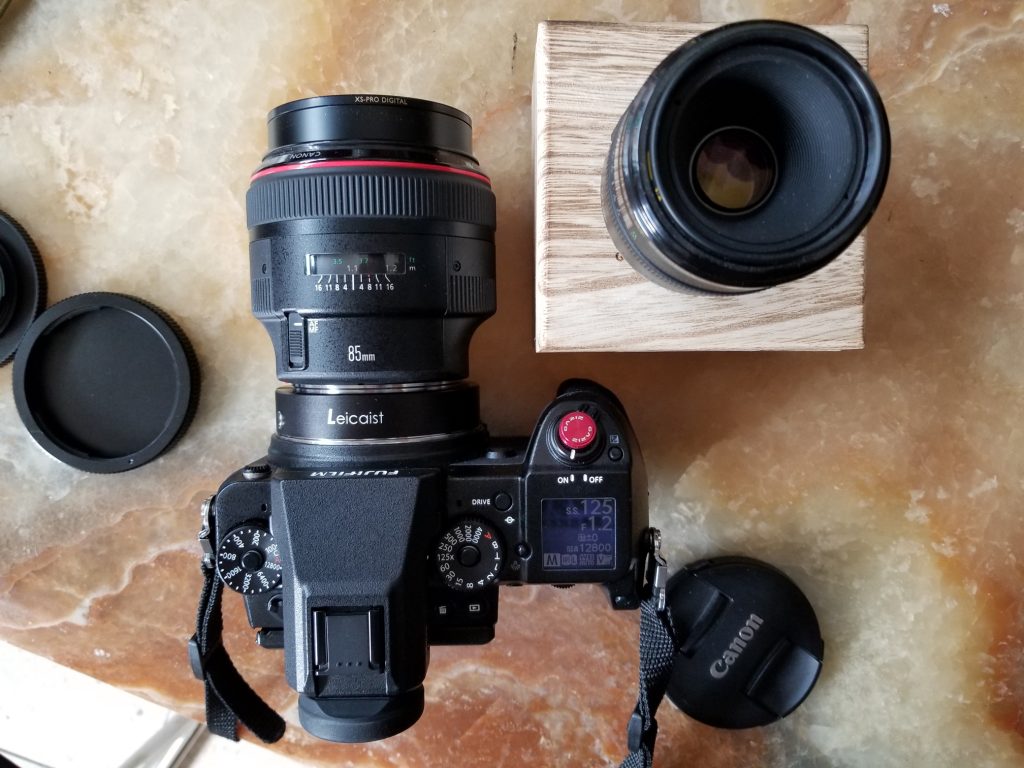 What does the adapter actually do?

To sum up, here are things that this adapter can do:

However, there are things that this adapter won’t do:

For this test, we selected 2 lenses: Canon EF 50mm f/2.5 Compact Macro and Canon EF 85mm f/1.2L II USM. Both lenses can cover the sensor size of GFX-50s at all distances.

Before Canon EOS 5D Mark III was released, EF 85mm f/1.2L II was famous for its slow and inaccurate focusing, unless you are using 1 series bodies. Some photographers said it was probably due to its huge and heavy aspherical element. When I was using Canon EOS 6D, I only had about 1/3 of successful focusing rate. But, the reason of testing this lens on GFX-50s is obvious: this is probably the only f/1.2 AF lens that works perfectly on a medium format camera (Canon EF 50mm f/1.2L USM has some vignetting therefore crop is required). Additionally, if EF 85mm f/1.2L II can perform well, other lenses may not have serious problems.

The overall focusing performance can be concluded as (Note: We are using firmware version 1.07, actual performance may differ under different version of firmware):

“Usable, better than nothing.”

During the test, it usually took less than 3 seconds for focusing (it’s very long compared with Canon bodies), however, the real issue is that sometimes you have failures, sometimes it takes too long for a successful focusing, and there is also a small chance that you have focus point drifting (similar to the problem that Sigma lenses had on Canon bodies).

We have the feeling that implementing PDAF on a medium-format sensor is difficult, and we think that Sony is probably the best company that has the technology to build such a sensor (looking at A7 Mark II series). However, we don’t think that Sony is going to cooperate with Fuji on this issue, the reason is simple: GFX-50s is the potential competitor of their mirrorless production lines.

Here are some FAQs about the focusing:

Q: Does this combination have comparable performance with original Fuji GF lenses?

A: NO, absolutely not. Actually, the focusing speed of original Fuji GF lenses are not that fast, therefore if Leicaist keeps working on the firmware, they may have comparable focusing speed.

Q: Does this combination have comparable performance with EF lenses on Canon bodies?

A: NO, absolutely not. Even a Canon 6D has better performance.

Q: Does this combination have comparable performance with EF lenses on Sony A7 mirrorless cameras with metabones adapters?

A: NO, absolutely not. Because Sony A7 has phase detection auto focusing (PDAF), it’s much faster.

Q: What is the success rate of auto focusing?

The following picture was taken using EF 85mm f/1.2L II at f/1.2. second picture indicated the centre of the image, you can see serious chromatic aberration of this lens (purple edges). 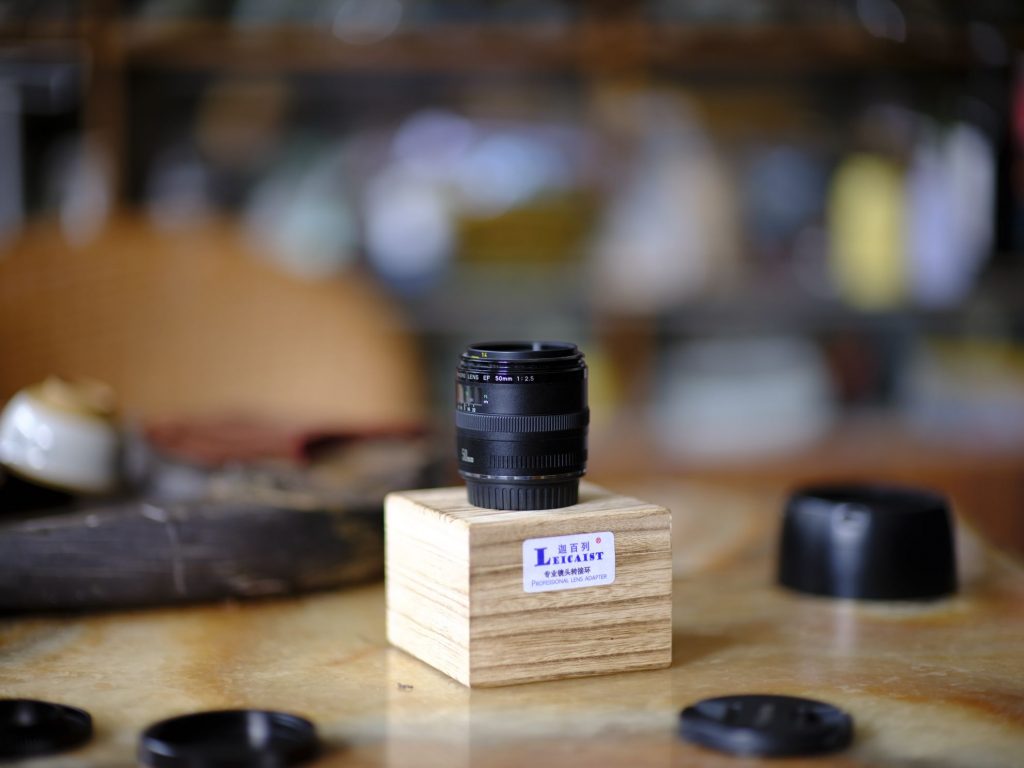 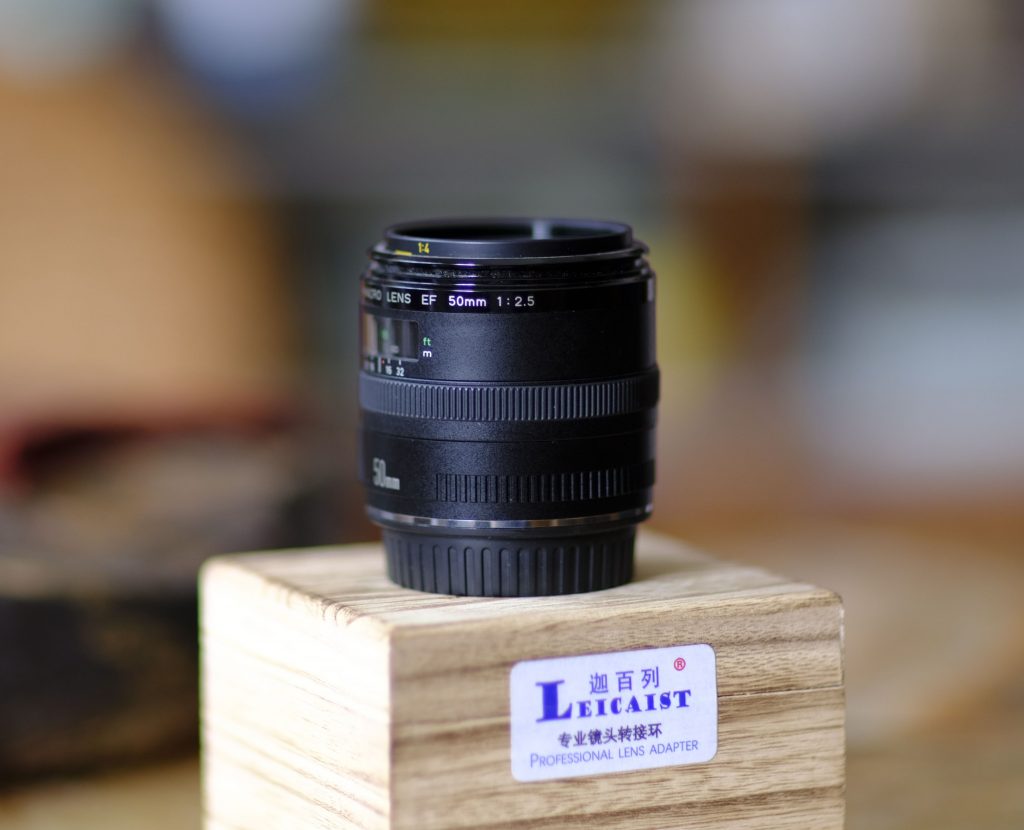 Here are some bugs we found during the test, all bugs are autofocusing related, so all other functions works well. (Under firmware 1.07):

To sum up, although there are some potential improvements on the autofocusing function  of the adapter, I still would like to recommend this adapter to GFX-50s users. Reasons are simple: you can use most of the Canon EF lenses, especially TS-E lenses (Now they have 17mm, 24mm, 50mm, 90mm, 135mm), you can log correct EXIF information on your image file, and don’t forget you can have autofocusing function as a bonus. For all these, its only costs you about 1/5 of the price of a Cambo CA-GFX, well, what else can you say?

Currently the adapter is only available on the Chinese market, you can find it on Taobao.com